Indonesian Culture, Traditional Performing Arts
MUSIC
Main article: Music of Indonesia
Indonesia is home to various styles of music, with those from the islands of Java, Sumatra and Bali being frequently recorded. The traditional music of central and East Java and Bali is the gamelan.
On June 29, 1965, Koes Plus, a leading Indonesian pop group in the 1960s, 70s and 80s, was imprisoned in Glodok, West Jakarta, for playing Western-style music. After the resignation of President Sukarno, the law was rescinded, and in the 1970s the Glodok prison was dismantled and replaced with a large shopping mall.
Kroncong is a musical genre that uses guitars and ukuleles as the main musical instruments. This genre had its roots in Portugal and was introduced by Portuguese traders in the fifteenth century. There is a traditional Keroncong Tugu music group in North Jakarta and other traditional Keroncong music groups in Maluku, with strong Portuguese influences. This music genre was popular in the first half of the twentieth century; a contemporary form of Keroncong is called Pop Keroncong.
The soft Sasando music from the province of East Nusa Tenggara in West Timor is completely different. Sasando uses an instrument made from a split leaf of the Lontar palm (Borassus flabellifer), which bears some resemblance to a harp.
DANCE 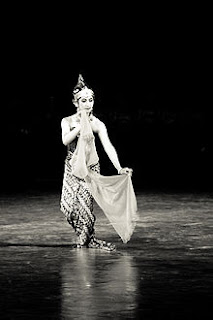 Main article: Dance in Indonesia
Indonesian dance reflects the diversity of culture from ethnic groups that composed the nation of Indonesia. Austronesian roots and Melanesian tribal dance forms are visible, and influences ranging from neighboring Asian countries; such as India, China, and Middle East to European western styles through colonization. Each ethnic group has their own distinct dances; makes total dances in Indonesia are more than 3000 Indonesian original dances. However, the dances of Indonesia can be divided into three eras; the Prehistoric Era, the Hindu/Buddhist Era and the Era of Islam, and into two genres; court dance and folk dance.
There is a continuum in the traditional dances depicting episodes from the Ramayana and Mahabharata from India, ranging through Thailand, all the way to Bali. There is a marked difference, though, between the highly stylized dances of the courts of Yogyakarta and Surakarta and their popular variations. While the court dances are promoted and even performed internationally, the popular forms of dance art and drama must largely be discovered locally.
During the last few years, Saman from Nanggroe Aceh Darussalam has become rather popular and is often portrayed on TV.
DRAMA AND THEATRE 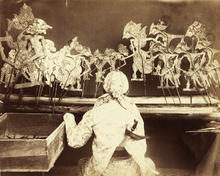 Wayang, the Javanese, Sundanese, and Balinese shadow puppet theatre shows display several mythological legends such as Ramayana and Mahabharata, and many more. Wayang Orang is Javanese traditional dance drama based on wayang stories. Various Balinese dance drama also can be included within traditional form of Indonesian drama. Another form of local drama is Javanese Ludruk and Ketoprak, Sundanese Sandiwara, and Betawi Lenong. All of these drama incorporated humor and jest, often involving audiences in their performance.
Randai is a folk theatre tradition of the Minangkabau people of West Sumatra, usually performed for traditional ceremonies and festivals. It incorporates music, singing, dance, drama and the silat martial art, with performances often based on semi-historical Minangkabau legends and love story.
Modern performing art also developed in Indonesia with their distinct style of drama. Notable theatre, dance, and drama troupe such as Teater Koma are gain popularity in Indonesia as their drama often portray social and political satire of Indonesian society.
Martial Art 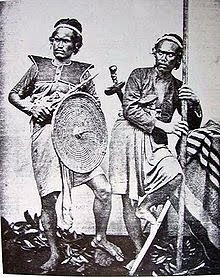 Main articles: Silat and Pencak Silat
The art of silat was created and firstly developed in the islands of Java and Sumatra. It is an art for survival and practiced throughout Indonesian archipelago. Centuries of tribal wars in Indonesian history had shaped silat as it was used by the ancient warriors of Indonesia. Silat was used to determine the rank and position in old Indonesian kingdoms.
Contacts with Indians and Chinese was further enriched silat. Silat reached areas beyond Indonesia mainly through diaspora of Indonesian people. People from various regions like Aceh, Minangkabau, Riau, Bugis, Makassar, Java, Banjar, etc. moved into and settled in Malay Peninsula and other islands. They brought silat and passed it down to their descendants. The Indonesian of half-Dutch descent are also credited as the first to brought the art into Europe.
Silat was used by Indonesian freedom fighters during their struggle against the Dutch colonists. Unfortunately after Indonesia achieving their independence, silat became less popular among Indonesian youth compare to foreign martial arts like Karate and Taekwondo. This probably because silat was not taught openly and only passed down among blood relatives, the other reason is the lack of media portrayal of the art.
Efforts have been made in recent years to introduce and reintroduce the beauty of silat to Indonesian youth and the world. Exhibitions and promotions by individuals as well as state-sponsored groups helped the growing of silat's popularity, particularly in Europe and United States. Indonesian 2009 Silat movie Merantau is one of Indonesian efforts to introduce silat to international scene.
Another martial art from Indonesia is Tarung Derajat. It is a modern combat system created by Haji Ahmad Drajat based on his experience as a street fighter. Tarung Drajat has been acknowledge as a national sport by KONI in 1998 and is now using by Indonesian Army as part of their basic training.
Source : wikipedia