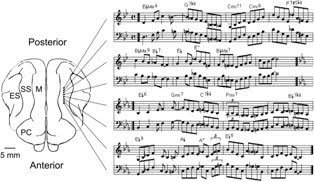 This page provides audio files where neuronal activity is "visualized" by creating music. The music is created from neuronal spikes recorded extracellularly in parietal cortex of awake and naturally-sleeping cats (taken from Destexhe et al., J Neurosci, 1999). 8 multiunit recordings were obtained with a system of 8 pairs of tungsten microelectrodes. Spikes were extracted using the BrainWave software. They were converted to MIDI, by associating each neuron to a given tone, and triggering the tone whennever this neuron fired. The MIDI files were then converted to MP3 using freeware programs. The music scores were generated by importing the MIDI files into the "Guitar Pro 5" program.
The "melody" produced by neuronal spikes gives an idea about the distributed firing activity of those neurons. MP3 files were generated for 4 cases: when the animal was awake (Wake-Neurons), during slow-wave sleep ("Sleeping-Neurons") or during REM sleep (REM-Neurons), where most dreams occur. The file "Poisson-Wake" is a randomly-generated stream of notes with the same statistics as for "Wake". Interestingly, the firing of one isolated neuron during wakefulness is undistinguishable from that of random (Poisson) activity (compare the audio file generated by one neuron during Wakefulness with that generated by a Poisson spike train with same statistics). However, the distributed activity (ie, the "melody") of several neurons is clearly different (listen to the difference between Wake Neurons with its Poisson equivalent, Poisson Wake - see below). This suggests that what makes our brains non-random is not in the firing pattern of individual cells, but it lies in the respective timing of the firing activity of different neurons...
The different audio files available are:
(in all audio files, the time base is four times slower than real time; all recordings are from the same experiment)
These files (and more files at different audio formats) are also available at the Internet Archive, under a page called Neuronal Tones.
Just for fun, see also the music scores for Wake Neurons, Poisson Wake, Sleeping Neurons, REM Neurons.
In the cases shown here, the simplest translation from spikes to music was used, namely each neuron produces its own note, at the moment it fires. It is possible to use more sophisticate ways of translating spikes to music, such as for example using more complex rules of harmonics and associate predefined phrases or chords with given patterns of neuronal activity. Work in this direction is currently under way.
http://cns.iaf.cnrs-gif.fr/alain_music.html