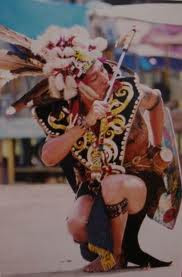 Central Borneo Dance, Arts are part of Dayak life. There are many various arts such as dancing, carving, weaving, sculpturing. Their sculptured carvings and statues physically represent their gods, and their carvings are influenced by their culture and beliefs.

Dances are performed during a ritual ceremony to welcome their heroes or their important guests. There are a number of dances from Central Kalimantan, such as:

In addition to the dances that have been mentioned above, there are still a number of beautiful Dayak Dances such as: Bukas, Balau Nganjan, Kanjan Palu, Kerangkang and Dandang Tingan dances.