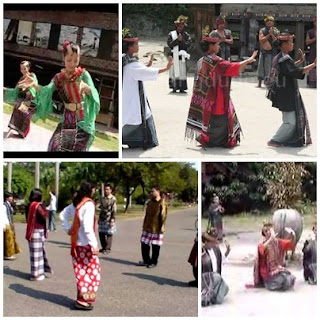 Music of North Sumatra - Indonesian Culture, 75 thousand years ago, a volcano erupted deep in the interior of North Sumatra, spreading ash as far as Sri Lanka and leaving behind a crater now known as Lake Toba. One hundred kilometers long, it is the largest volcanic crater lake in the world. The fertile volcanic soils of its shores have supported intensive agriculture for millenia. Its great natural beauty has made it Indonesia's third-largest tourist attraction. This is the original homeland of the Batak, a family of seven Indonesian ethnic groups with a population of perhaps two million.

These seven groups (Toba, Karo, Simalungun, Pak-pak, Dairi, Angkola and Mandailing) have related but distinct languages, customs, and traditional arts. Such is the variety of Batak music and dance that no one program could present even a sampling of it all. Festival of Indonesia has chosen to concentrate on three highly contrasting traditions: those of the Toba, the Karo and the Mandailing.


The Batak groups are divided by religion (the Mandailing are Islamic; the Toba, Christian) and by language (Toba and Karo in particular are mutually unintelligible), but unified by a common passion for genealogy. It is not unusual to meet Batak men who can recite fluently the names of eight generations of their ancestors. These ancestral trees represent a sort of blueprint for Batak society; they explain the origins of and relations between the clans (marga) which dominate Batak social life.


Every Batak belongs to one of these patrilineal clans. They are exogamous: a man may not marry a woman from his own clan, but must search among other clans for a wife. The marriage ties which link clans form an intricate web of kinship which touches every aspect of Batak society. The clans also order Batak culture, ceremony, mythology and the arts.


There are musical compositions specific to one or another clan; clan membership determines the order of events at the life-cyle ceremonies at which music and dance are essential.


Music and dance play a crucial role in Batak society. The word for "ceremony" ("gondang" in Toba; "gendang" in Karo) is actually a musical term and refers both to the Batak orchestra of drums, gongs, and oboes and also to the tunes they play. The musicians are essential to a ceremony because they are the intermediaries between humanity and the Creator. The sounds of the drums and gongs convey human prayers to the spirit world.


Musicians thus command great respect in traditional Batak society and they must follow a certain code of behavior. "The musicians must be honest men," explained one old Toba Batak man, "otherwise they risk angering the spirits."
Gondang Uning-Uningan