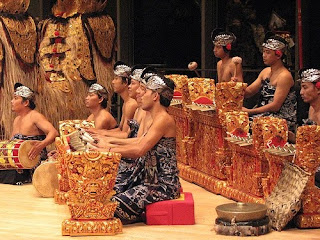 There are a large number of Balinese gamelan recordings available, in a variety of styles. This list will be very brief, containing only my own personal highlights of a rather large discography. In fact, after a relative explosion of recordings devoted to Balinese gamelan, the number of releases seems to have slowed considerably in recent years.
Compared to the style of Java, Balinese gamelan uses fewer sonorities. The sound is almost entirely derived from striking metal of various shapes, with skin drums used to direct the ensemble. The gamelan music does not include voices, winds, strings, etc.
The oldest and most austere style is the Gamelan Gong Gede. Two excellent recordings of this music:

An innovative style at the beginning of this century was the Gamelan Gong Semar Pegulingan. This style is sweeter and more rhythmically varied. There are other recordings of this style available, but the following is especially noteworthy:

Lotring was the man who invented the Gamelan Gong Semar Pegulingan, and this set consists of Lotring and his musicians playing his own compositions (now often played by other ensembles). This recording was made in the 1970s when Lotring was an old man. As such, it is of unique musical value.
The more recent style is the Gamelan Gong Kebyar. This is the flashy style for which Balinese music is mostly known today. It will not appear here.