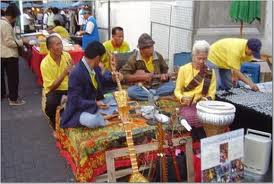 This page will provide a little tour through continental Southeast Asia. In all of these cultures, music holds a high place. The discussion will be very brief, and unfortunately lacking in detail. Nonetheless, I hope this short survey proves worthwhile as a general orientation.

Historically, Cambodia was the dominant culture in peninsular Southeast Asia, whereas the others exerted their independence more recently (i.e. the last 500 years). Here it is the royal court music which is very highly developed and the most stimulating.
Cambodian court music is roughly similar to that of Java, i.e. choruses with large orchestras based on struck keys & gongs. This music gained a world-wide reputation in the 1960s, shortly before the dramatic political problems in Cambodia. Now it is struggling to recover.
As such, most of the available recordings are fairly similar. The most substantial recording of the big court styles:

Compared to Java, this style has more of a "folksy" air about it; the modes and rhythmic cycles are less elaborate. Sonorities of wood and plucked strings are more prominent, and some pieces incorporate reeds. As such it is sometimes more akin to the music of Thailand and other surrounding regions. The dance element is never far removed.
There is another similar recording on Auvidis Unesco (both recorded in the 60s). There is a recording devoted to the pinpeat style on Auvidis Inedit, as well as a Ramayana recording on Ocora, and a folk disc on Auvidis Unesco. There is a new recording on the Music of the World label. There is also a fairly recent 3CD anthology of music from throughout Cambodia on the Celestial Harmonies label which has some interesting material in a variety of styles, both court & folk. These can be rather intriguing.
With record distribution becoming more difficult to track these days, it is entirely possible that there are now other items worthy of note.

There is an amazing variety of musical style in Vietnam. The number of different instruments alone is astounding. I cannot begin to survey the field, nor can I pretend to really understand it. However, some thoughts are still in order.
Despite the wide array of different cultures, some basic centers do crystallize. One area which had a highly developed musical culture, based on various unique & intricate modes, was the central part of Vietnam centered on the court at Hue. This was the center of the medieval state of Champa, which had a direct relation to those in Indonesia, and was eventually overturned and replaced with rule by ethnic Vietnamese some decades before the European arrival.
A few recordings have illustrated some of the court songs and ceremonial music from this area, although for the most part it is pieced together from a post-French diaspora. Among these, the chamber repertory for the solo 17-string zither, incorporating both composed and improvisatory passages, remains among the most intriguing & distinctive. The following recital is a good one:

The style is monophonic, with unusual modes (vaguely similar to those of Korea). The latter performer (who accompanies on only two tracks) also has a recording on Playasound.
When it comes to "true" Vietnamese music from the North, an intriguing vocal style has begun to appear on record:

This style is essentially "art music" focusing on love themes and requiring a high degree of technical skill. Although its origin is not documented, it seems peripherally related to the Laotian selection below.
Other Vietnamese styles incorporate Chinese or Thai influences, while others are completely unique. There are supposedly a hundred or more musical instruments in use. A 3CD set on the Celestial Harmonies label makes a nice survey of the variety.

Thailand is certainly the best-known of these countries to us today. The music is very cosmopolitan, borrowing ideas from many of the surrounding cultures, especially Cambodia. As such, it sounds rather mixed to me, and is definitely eclectic. Thailand is also fortunate to have the fine ensemble Fong Naam recording its traditional music. This ensemble consists of both virtuoso performers and musicologists. They have several recordings, and in my opinion one of the more unique & characteristic is this one:

Of course, the first four volumes of this series (which explore music of different historical eras) would be a fine place to turn to learn more about Thai music. There are also two recordings by Fong Naam on the Nimbus label, as well as recordings by other ensembles.
There was an explosion in the availability of Thai music recordings in the 1990s, although it remained a secondary interest for me. This wave of releases seems to have abated, however, for whatever reason.

Besides the court orchestras represented above, Northeast Thailand and Laos also have a more distinctive native tradition of improvised song and mouth organ (khene). The mouth organ sounds rather like a bagpipe, although the musical style is a bit different. The improvised songs (Lam) are impressive in their vitality. A superlative recording:

This music is quite different from the other traditions of Southeast Asia and the world (although it has its analogs in China). It has an "earthier" feeling than the other selections here, and is rather compelling and effective.
There is now a CD devoted to the Lam Sithandone style of improvisation (as opposed to the Lam Saravane above; there are six major styles of "Lam" in Laos) on the World Music Library label, which although valuable, lacks the highly charged atmosphere of the Ocora selection above.

Burma (Myanmar) has orchestral styles similar to Thailand and an unusual style of chamber music (the harp is the primary instrument) with a delicately ethereal sonority. A quality recording, illustrating both styles:

This music did not really hold its interest for me, but it is definitely worth hearing at least once, as there is nothing else quite like it. There is another survey to be found on the World Music Library label.

In addition to the lists for Java and Bali, there are other styles in Indonesia. Most of these cannot really be called "classical" (although there is a move to create a national style, combining tradition and innovation, and recordings of this music are available in a series from Lyrichord), and I will not list them. Otherwise, there are some related song traditions in Sunda, dating to the 19th century which are getting more exposure of late.
Finally, this disc from South India is as closely related to the other items above as it is to Carnatic music. It illustrates the primary percussion-based ceremonial styles (along with chant recitation) surviving in the state of Kerala: