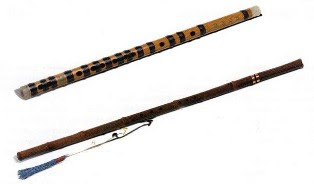 There are increasingly many recordings of Chinese music. I have heard most of those produced in Europe or North America, and am starting to be able to hear those from China, Hong Kong & Taiwan as well. In the latter case, there is a large variety as well as some difficulty obtaining them, so I will concentrate entirely on the so-called literati music which is my priority. Returning to more generally available recordings, many are orchestral of various types, and so of lesser interest to me. There are also some song recordings, but I have not explored those as much. Somewhat unusually, instrumental performance has long had a certain kind of pre-eminence in Chinese art music, as scholars of all disciplines were expected to become proficient in it.
Chinese music is basically pentatonic-diatonic, meaning that the basic pentatonic scale can be modulated within a diatonic context. The theory talks of 12-notes to an octave, but most of the compositions are overwhelmingly pentatonic with diatonic/chromatic passing tones. This is even more true of the traditional orchestral music than of the more intricate scholarly music which makes up most of this page. Generally speaking, the Chinese tunes with which many readers will be familiar are much simpler than most of what appears here.
Solo instrumental performance is the most serious musical genre, and will be emphasized here. The best performances should bring out harmony with one's surroundings, although at times a more aggressive tone is used. The intonation is very subtle, and generally similar to poetic recitation. The music itself is clearly designed to be an abstract complement to the highly-developed poetic genres, and bears similar titles. The prominence of poetry & the aphorism might help explain the restricted impact of vocal art music.
There are rather few classical compositions, although each instrument has its own repertory. Some of these repertories are several centuries old, and musicians add to them only slowly, especially in some areas. Therefore many compositions will be repeated from CD to CD, mostly for the same instrument, but sometimes versions exist for more than one instrument. Also, a performance by a musician from a different lineage will often bring out different facets.
I will especially emphasize qin music, and look to buy many such recordings. Now there are literally dozens available, of very high quality. The qin section is consequently large, and increasingly becomes a priority. In other areas, I intend to keep representative samples up to date, but have largely stopped putting in similar effort.
Anthologies still provide the easiest way to experience Chinese art music, as the variety of instruments and styles can be surveyed in one recording. Although that will not be the focus here, experiencing different instrument combinations is certainly recommended for a full appreciation. The finest general anthologies are probably those on Ocora Radio France, Wind Records, and the set on Celestial Harmonies reissued from the Hugo label (some of which will appear below).
All of the suggested recordings below are modern and of good production quality. Fortunately, the situation with music produced in China is much better in this respect than with that produced in India, so there is no real conflict between recording & musical quality. There are now several recordings which are extremely compelling in all aspects.

The seven-(historically five- or ten-)string zither, qin, is considered to be the supreme instrument of the scholar. The compositions make use of a wide range of timbral effects. Its repertory consists of approximately 600 pieces, including some dating to pre-Han times. Playable instruments survive from as early as the T'ang Dynasty. The system of tabulature notation was invented in the T'ang period, replacing an older system in which a piece was described entirely in words (some of these sources survive). This marks one point in the development of the repertory. The next came with proper printing which began in the Sung & Ming eras, and so makes it possible for the first time to securely date versions in the modern sense. New items are slowly added to the repertory, and some rhythmic interpretations are now given in Western notation in supplement to tabulature. This instrument continues to provide the main musical representation of the literati culture.
The instrument speaks to me particularly strongly. The guqin presents an exceptional richness of timbre and subtlety of articulation, along with a repertory refined over centuries. The music is quite sophisticated and dense in ideas, and presents a real opportunity for "interpretation" by a range of fine musicians. This section will be particularly extensive.
The first items to be listed are multi-CD anthologies recorded at qin conferences. This is a rather unique phenomenon, in which performers on the instrument routinely congregate in one location. The synergy developed can be quite remarkable, and the recording productions made over a couple of days at the conferences can illustrate the best pieces by some of the top performers present. In some sense, these programs are not anthologies, since they are recorded at the same location during the same sessions, often with the other performers in attendance.

These are the two such conference anthologies on CD, and each is remarkably compelling. Either set makes an obvious first place to go in order to build an appreciation of this instrument and its music.

Of course, individual recitals are an opportunity for a performer to present a personal style in more extensive detail. In this sense they can be more compelling, although learning even a handful of qin pieces to the level of mastery sought can be a long process. I have selected several individual recitals whose styles are particularly compelling to me.
Selections in order of performer seniority:

I have been selective for this list, just as on other pages, but believe it does also represent the variety available in performance fairly well. However, there are many other recordings of high merit which could be listed, so it is not exhaustive in that sense. I intend to continue to explore new recordings as they appear and make some adjustments in the list.
The range of articulation for this instrument gives rise to a rather striking variety of performance styles, especially as regards the two aspects of "vibrato" yin & nao (the former narrow and buzzing, and the latter longer and twang-like). The approach to rhythm also differs markedly between the different qin lineages, although the styles have been coming together in the hands of younger performers.

The zheng is a movable-bridge zither, and the most dynamic solo instrument in China. Its repertory ranges widely, from ancient pieces in a style similar to those for qin, to various regional styles related to folk songs & operas, and on to a large body of newly-composed music for the instrument. The technique can be quite complex, especially in the newer music. A very traditional and refined selection:

This is the most characteristic instrument of the Chinese classical orchestra, described in writing as early as the Han Dynasty, and found in variants thoughout the area. Instruments of similar heritiage and design include the Japanese koto, as well as important instruments in Korea and Vietnam. Some traditional models have 13 to 16 strings, whereas more modern designs can have as many as 30 strings. The 21-string variety is now considered the standard.

The pipa is a pear-shaped lute-like instrument with large frets and a broad finger-board. It was introduced into China from Central Asia prior to the T'ang Dynasty, and has both a "literary" and a "martial" repertory. This fine recording illustrates both:

In this case, there are other recordings available on Western labels, although the present one is still preferred. I have seen none from China itself, oddly enough.

Although it has a very long history going back to Han times and beyond, the xiao has been slow to develop a solo repertory. It is a vertically-held bamboo flute, and the only instrument appropriate for accompanying the qin, as it is suited to music of similar depth and restraint. The following recording includes some superlative solo tracks:

Besides the vertical flute xiao, there is also the side-blown flute di which has a very large repertory oriented mostly toward spritely & operatic music. It is often used in small ensemble situations, and there are some quality recordings featuring it, including on Western labels.