Great Inspiration From The Beatles

Author. Pakar Bisnis    On. Selasa, Agustus 10, 2010
about music about musics about world all about musics artikel musik Dunia Kita history jeo music musics musik sejarah musik world music
The Beatles are one of the popular rock band as well as the most influential in the modern era.
Members John Lennon, Paul McCartney, George Harrison and Ringo Starr, most of their songs written by Lennon and McCartney
Their popularity so high in the United Kingdom so that in 1963 the press spawned the term "Beatlemania"
They also later success in the United States and around the world.
Formed in Liverpool in 1959 with the formation of the early John Lennon (vocals, guitar), Paul McCartney (vocals, guitar), George Harrison (vocals, guitar), Stuart Sutcliffe (bass) and Pete Best (drums). But soon after Stuart Sutcliffe resigned (to move to Germany and married Astrid Kircherr and died there in 1962 due to bleeding in the brain). Then in 1962 Pete Best leave from The Beatles, and his position was replaced by Richard Starkey aka Ringo Starr.
Manager of The Beatles, Brian Eipstein, through the Beatles' first introduction to the many buyers request LPs in music store. The first time Brian tried to offer Beatles to Decca Records, a major label record company at that time.Auditions can be obtained, only Decca management believes that the group had passed the guitar music tenarnya. Although the four young men to be broken charcoal, Brian was finally able to get an audition for them at a record label, Parlophone, which is true for radio recording company. George Martin, Parlophone manager, agreed, and began recording for the Beatles' first album, entitled "Please Please Me". Song Please Please Me and Love Me Do is a mainstay for the album. 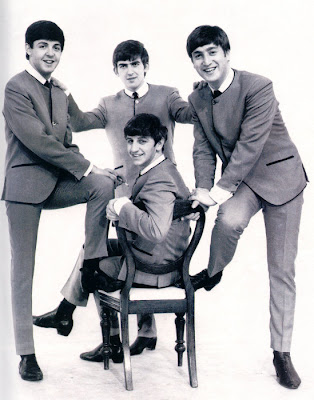 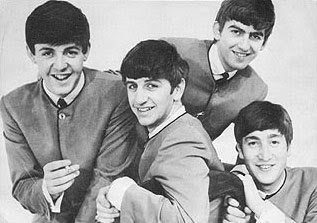 Some said it couldn't really be happening; that it was just publicity. And the fabulous Beatles proved them wrong. Others said they couldn't last more than a month or two; that nobody could hang on to that kind of fame. The Beatles, of course, proved them wrong too. Then when their first movie was released, and even the critics liked it, people began to wonder if all those Beatle fans hadn't really discovered something after all.
But you, the Beatles' fans, knew all along. You knew that the Beatles really do have a style and a sound like there's never been before. And it's simply because you like them (and they like you) that this fantastic success story has happened, and continues to happen more and more all the time.
And now here's what you've been waiting for -- a new Beatles album with all new Beatles songs. These are the new favorites by the four boys who have proven themselves to be the biggest favorites of all. Here's The Internet Beatles Album!

cope in 1969, the Beatles make an album that actually recorded from 1966., This album is called Abbey Road. and is referred to as one of the best albums of the Beat Suddenly came the news that one of the personnel named Paul McCartney beatles who've died. This conspiracy theory began when a radio caller named "tom" called into a radio station and announced if Paul McCartney had died already, and asked to play the song "Revolution No. 9" played in reverseles. hen the radio station that claimed to hear a phrase "Turn me on, dead man" to "Abbey" itself after I was looking for meaning in Syriac language means "father" and in the general sense is the "road manager / spiritual matters". and in the sense of its meaning is an ancient English Convent or a religious association "monastery". according to rumors circulating in the beatles fans, clothes they wear is a clue. Starting from Jhon lenon-paced clothing white as a sign of God, the next is Ringo Star is wearing a neat black suit and shiny shoes who mengarikan as pastor. Third, Paul McCartney wearing a coat but no shoes, his jacket was not tidy. In the culture of English people died was buried with his jacket neatly and no shoes. While the latter is Goerge, with most casual clothes with only jeans and clothes that are not official, defines as a grave digger. Also note if there was a car behind the middle of the road there, her straight to the position of Paul McCartney who is often referred to as a way of Paul's death. n the car on the left that there are white plate number 28 (at that time was indeed paul 28 years old). On the right, there's a black car. It's in English culture is a hearse. And this rumor was spread throughout the entire world and believers with this odd rumor. So many of us wonder, whether true or not remains a mystery. Because until now there is an official statement that this album cover just dibuatan suddenly and performed in front of the blue apple juga.apple rec recording is a recording company owned by the beatles .