Author. Pakar Bisnis    On. Kamis, Agustus 19, 2010
about world Dunia Kita ryo jeo tahukah kamu? top ten unik world art
3D sidewalk artist such as Kurt Wenner and Julian Beever have been confusing passersby and wowing people for a couple of decades now. We’ve found some of the best and mystifying examples and passed them onto you, our loyal subscribers.
Side walk art has come a long way from having a few pieces of chalk and nothing to do all summer. Some of these pieces of sidewalk art just made us say “NO WAY!” So we figured we’d share them with you.

The shark is a little impressive but it is the implied motion of the bricks flying at you that really make this picture “pop out” at you. The texture and “movement” of this piece of sidewalk is impressive. 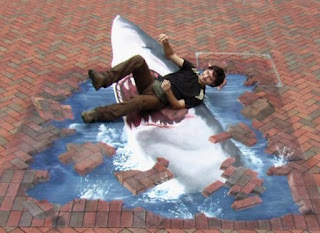 Have a Coke and a smile. Or in this case, have a Coke and a BIG Ole Smile. Holy man that is a big coke bottle. The only thing that could top it would be a real Coke that size. Ahem, I’ll be right back, I suddenly have to pee.

OK! I’m back! Even without Hambone there acting all cool, this is still a very neat picture. I love how the water seems to ripple along behind the boat. Very tranquil. Very Nice. Very much a realistic water scene… I’ll be right back.

What’s more scarry than hell opening up in the middle of the tourist strip?

In the concrete jungle of the big city, a river may be hard to come by. An optical illusion will do the trick for the adventurous youth.

what’s more cool than a big bottle of Coke? A giant bottle of beer. Look at that guy’s smile. Oh yeah he knows! The detail isn’t as sharp as some of the srt we’ve seen but, the 3D effect is great and so is the thought of a beer that large.

When you’re not too buisy commuting, lend your hand to some lost and hopelessly condemned souls.

Okay take into consideration this: the guy, the stairs and the wall behind the guy are the only things real in this? Impressed yet? No? Taken a depth perception test lately? This is huge detail and a great concept executed very very well. PREGO!