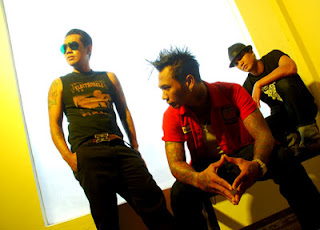 The name 'Superman is Dead' started its' evolution from Stone Temple Pilot's "Superman Silvergun". The name moved on to "Superman is Dead" cause they like the idea that there's no such thing as a perfect person out there.
SID actually stumbled together in '95, drawn by their common love of Green Day and NOFX. Their influences soon extended to the punk 'n roll genre a la Supersuckers, Living End and Social Distortion, and here they stay. They say what they wanna say, how they wanna say it. In your face, to say it precisely.

In March 2003, SID finally signed with Sony-BMG Indonesia after extended negotiations regarding their right to sing the majority of their tracks in English and have full artistic rights over their 'image'!! With that decision they single handedly became the first band from Bali to be invited to sign with a major recording label in Indonesia, the first band in their nation (to my knowledge) to be recording majority of songs in English and the first punk band in Indonesia to get the national exposure and promotion that working with a major label in a third world country provides. And so the history of Indonesian Punk Rock begins!

And as for the question that everyone wants to know, the infamous bomb in Bali happened about 75 M from their home, hangout center, punk rock boutique, bar and rehearsal studio that is also Jrx' house, in the heart of Kuta.
After panel beating back the rolling doors of the studio and shifting a little debris, rehearsals continued as usual. Yeah, they saw a lot, it sucked big time, but its' not gonna stop 'em!

And where are they now? At the end of 2002, one of the more respectable music mags here cited SID as "The Next Big Thing" for 2003. With the release of their fourth album "Kuta Rock City" followed by major air play nationally and in some countries overseas, coupled with the instant popularity of their newest film clip.

SID suddenly find themselves touring continuously throughout Indonesia. Last week they were in four major Indonesian cities, on three islands, in 7 days! Sometimes playing for free at underground scene clubs, sometimes at street skate parties or alternative band festivals, at lots of universities and even occasionally at "classy" venues who would have probably denied them entrance years ago!
Which means more beers for all.

June – July 2009, Superman Is Dead held An American Tour, 16 Gigs in 16 cities. 11 gigs of them were the ‘ Vans Warped Tour’ and the last 5 gigs were ‘From Bali With Rock’. They did a very hard work to succeed this excited tour, had crossed the big land from westcoast to eastcoast and got back to westcoast.

SID had share stages with international bands such as International Noise Conspiracy, NOFX, MXPX and Hoobastank.
They remain proud, boys from the streets of Kuta with a love of punk rock, beers and a good time. Ready for whatever comes next, excited about the next gig.

Some Videos have been uploaded at Youtube.com Please click the URL to check'em out :
http://www.supermanisdead.net/nl.php?id=88